This book aims to analyze the figure of the great Russian composer Aleksandr Nikolaevič Skrjabin (Moscow, 1872-1915) from different angles and perspectives: a sort of mosaic that binds together the aesthetic, historical, and linguistic aspects of musical production, and existential philosophical ones. In particular, through an analytical reading of his original writings, the philosophical and theosophical theories that he placed at the basis of his own creative itinerary are examined. In addition, a harmonic and structural analysis of the latest works for piano is presented, which hinges on the Skrjabinian linguistic system and tries to reveal its logic and compositional evolution. 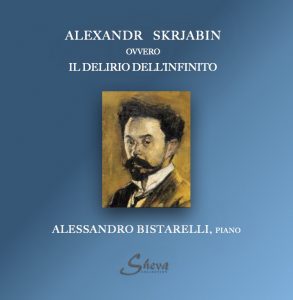 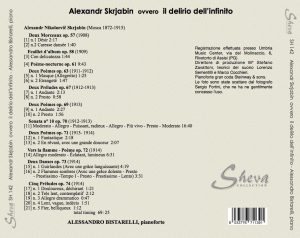 The CD features the last piano works of the composer Muscovite Alexandr Skrjabin (1872-1915). The title is intended to evoke the philosophical universe, visionary and poetic composer: “Skrjabin or the delirium of infinity”.

The music found in this collection were composed in the years 1908-1914 and were to flow into the Mysterium, the work of cosmic regeneration.

The artist thought, in the Mysterium, to fuse music, poetry, sounds, colours and perfumes, in a sort of collective ecstasy that would have propitiated the spiritual renewal of all humanity.

Skrjabin was unable to fulfill his dream, but his life’s work, in full creative autonomy, are among the most visionary and prophetic pages of the composer.

This website uses cookies to improve your experience while you navigate through the website. Out of these, the cookies that are categorized as necessary are stored on your browser as they are essential for the working of basic functionalities of the website. We also use third-party cookies that help us analyze and understand how you use this website. These cookies will be stored in your browser only with your consent. You also have the option to opt-out of these cookies. But opting out of some of these cookies may affect your browsing experience.
Necessary Sempre abilitato
Necessary cookies are absolutely essential for the website to function properly. This category only includes cookies that ensures basic functionalities and security features of the website. These cookies do not store any personal information.
Non-necessary
Any cookies that may not be particularly necessary for the website to function and is used specifically to collect user personal data via analytics, ads, other embedded contents are termed as non-necessary cookies. It is mandatory to procure user consent prior to running these cookies on your website.
ACCETTA E SALVA